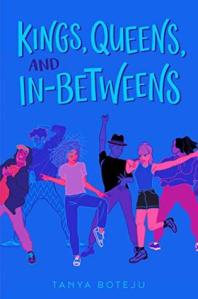 Perpetually awkward Nima Kumara-Clark is bored with her insular community of Bridgeton, in love with her straight girlfriend, and trying to move past her mother’s unexpected departure. After a bewildering encounter at a local festival, Nima finds herself suddenly immersed in the drag scene on the other side of town.

Macho drag kings, magical queens, new love interests, and surprising allies propel Nima both painfully and hilariously closer to a self she never knew she could be—one that can confidently express and accept love. But she’ll have to learn to accept lost love to get there.

I love this book for all of the own voices elements and the loving depiction of drag, but it doesn’t escape some first book shakiness.

All in all Kings, Queens, and In-betweens is a fun read. Normally I would sell a three star read back to the used bookstore, but I’m keeping this one on hand so I can hopefully give it to the right person at the right time. 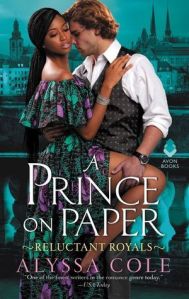 Nya Jerami fled Thesolo for the glitz and glamour of NYC but discovered that her Prince Charming only exists in her virtual dating games. When Nya returns home for a royal wedding, she accidentally finds herself up close and personal—in bed—with the real-life celebrity prince who she loves to hate.

For Johan von Braustein, the red-headed step-prince of Liechtienbourg, acting as paparazzi bait is a ruse that protects his brother—the heir to the throne—and his own heart. When a royal referendum threatens his brother’s future, a fake engagement is the perfect way to keep the cameras on him.

Nya and Johan both have good reasons to avoid love, but as desires are laid bare behind palace doors, they must decide if their fake romance will lead to a happily-ever-after.

I’ve had very hit and miss experiences with Cole’s other contemporary novels, but this is my favorite Reluctant Royals book by far.

The good, in no particular order:

I’m happy I stuck with the series through a DNF and two mediocre reads, and am looking forward to whatever Cole may come out with next. 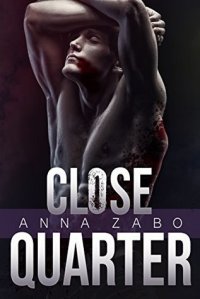 On a transatlantic cruise to New York, sculptor Rhys Matherton struggles to piece his life back together after losing his mother, inheriting a fortune, and finding out his father isn’t his father after all. He spills a tray of drinks on a handsome stranger, then he finds himself up against a wall getting the best hand-job he’s ever had. And for the first time in his life, he feels whole.

Rhys enjoys the company of Silas Quint, but for the eerie way no one pays attention to them even while they kiss in a crowded bar. Silas explains he’s a forest fae able to glamor the room around them—and more importantly, that he’s on the cruise to hunt vampires. Rhys thinks Silas is full of it, until he discovers vampires are real, and he’s part of their main course.

Zabo’s Twisted Wishes series (first book Syncopation) is amazing, but now that it’s over ~sob~ I wanted to dip into their backlist. The first book I came up with was Close Quarter, a paranormal m/m romance set on a cruise ship.

I have to admit, I wasn’t exactly sold by the jacket copy. Fae and vampires on a cruise ship? But Zabo does a good job of introducing us to the characters and slowly building out the world. We learn about fae and vampires (called soulless) along with Rhys and while there aren’t many high level ‘why the world is like this’ answers, I don’t expect that in the first book of a series.

I’m a fan of the relationship because, thanks to some paranormal handwaving, it’s based on an intimate knowledge of each other. There’s some great banter, too.

“You’re so damn young. Beautiful. Like a spring morning.”
“What, cold, foggy, and damp?”
Silas shifted on the tub’s edge, turned his hand to capture Rhys’s fingers. “Warm and occasionally dense. But full of promise.”

As hinted in the same jacket copy, the sex starts early and happens often. I love steaminess in my romance, and a bunch of the sex scenes help us understand Rhys and Silas’ relationship and how it evolves. At the same time, I think there’s too many of them. Whenever they finish fighting a baddie it’s back to the cabin for sex. At times it feels like stalling, waiting for night to fall so they can get back to killing soulless.

While the plot is fine it needed a little more. I would expect a 262 page book to have a solid subplot, but beyond Rhys wondering about his family we come up short. Part of that is because there are precious few characters – beside good guys Rhys and Silas we have the Big Bad, his cookie cutter lackies, and a waiter on the cruise ship. That’s it.

I would argue that this book could be edited down into a 150 novella and made amazing. As is it’s still a fun read and I would continue the series, but Close Quarter was written in 2012 and there still isn’t a sequel. Ah, well. I’m looking forward to moving on to Zabo’s contemporaries.