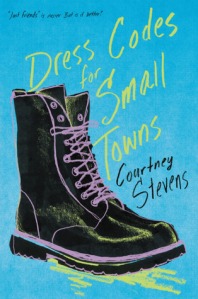 As the tomboy daughter of the town’s preacher, Billie McCaffrey has always struggled with fitting the mold of what everyone says she should be. She’d rather wear sweats, build furniture, and get into trouble with her solid group of friends: Woods, Mash, Davey, Fifty, and Janie Lee.

I like a lot about this book, so much so that it gets over my usual “enh, YA”-ness. This is no small feat, guys!

If you are a fan of contemporary YA, books that follow a group of friends, and questioning/queer representation Dress Codes for Small Towns is the book for you.  I’m surprised I haven’t seen it around more – it deserves more hype.