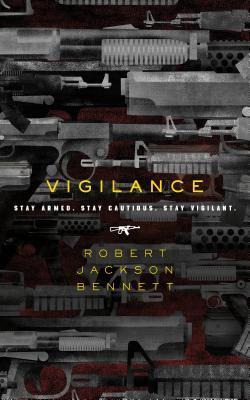 The United States. 2030. John McDean executive produces “Vigilance,” a reality game show designed to make sure American citizens stay alert to foreign and domestic threats. Shooters are introduced into a “game environment,” and the survivors get a cash prize.

The TV audience is not the only one that’s watching though, and McDean soon finds out what it’s like to be on the other side of the camera.

Trigger warning for anything and everything guns, violence, and mass murder.

The America circa 2030 that Bennett pictures is not a happy place. Take the most troubling parts of American life and shove them down the slippery slope – a lack of gun control leads to a culture where open carry is de rigueur and random gun violence is part of everyday life. Technology has evolved and a newscaster can be generated from algorithms, and live video can be manipulated to the point that you never know if what you’re watching is completely real. The West has fallen on extremely hard times and many young people in America have emigrated to places with better prospects like China and South America.

In this dystopian but eerily familiar world mass shootings approach entertainment, leading one company to develop a reality show based on that concept. Pay the owners of malls and other public gathering sites for the right to stage an episode of Vigilance at a time of the producer’s choosing, several fully armed people who want to commit mass murder are set loose on the unsuspecting crowd, and people who survive get a big cash reward. The entire ordeal is broadcast live to millions.

The book follows the production of one Vigilance episode through the eyes of the main producer in the control room and a bartender every-woman. We see how America has changed, how hungry the public has become for this entertainment, and how many almost relish the thought of being unwittingly cast in the show to see if they have what it takes to survive.

Parts of this book are very well done. The world building in particular is tight and combined with a driving plot led me to reading the novella in a single day. (Wanting to avoid violent dreams may have been another reason….)  The America Bennett imagines may seem too far gone but the seeds of many ideas, especially with regard to technology, already exist today.

I had a bunch of issues as well, though. First, despite the female POV character I doubt this passes the Bechdel Test, and most women characters (that is, two out of three-ish) are stereotypes or a virtual personality made to fit the expectations and criteria of men.

Second, while the set up is interesting the end of the story fell flat. One character ended up being the undoing of another, and I recognized it as soon as they were introduced because I saw how the stereotypical gender dynamic was going. The story ends on a big AHA that felt not only out of left field but not in keeping with the themes he had been playing with to that point.

I think Vigilance works as a piece of speculative fiction in that it shows what America, ruled by greed and unchecked gun possession, could become. The idea of the reality show is fascinating, and I kept reading to see how this sort of thing could possibly be set up. Once we get past the setup, though, there’s a whole bunch of disappointment. It’s a haunting read, to be sure, and the idea behind the book will stick with me longer than the so-so writing, plot, or characters.

Although beautiful young widow Phoebe, Lady Clare, has never met West Ravenel, she knows one thing for certain: he’s a mean, rotten bully. Back in boarding school, he made her late husband’s life a misery, and she’ll never forgive him for it. But when Phoebe attends a family wedding, she encounters a dashing and impossibly charming stranger who sends a fire-and-ice jolt of attraction through her. And then he introduces himself…as none other than West Ravenel.

West is a man with a tarnished past. No apologies, no excuses. However, from the moment he meets Phoebe, West is consumed by irresistible desire…not to mention the bitter awareness that a woman like her is far out of his reach. She’s the daughter of a strong-willed wallflower who long ago eloped with Sebastian, Lord St. Vincent—the most devilishly wicked rake in England.

West has been developing as a character over the entire course of the Ravenel series so I was excited to see that he is the hero of book five. He’s become an awesome guy and deserves a happily ever after! While Devil’s Daughter is a solid romance in the Kleypas mold I was hoping West’s story would be my favorite of the bunch, but alas.

Devil’s Daughter is another solid book from Kleypas, but considering that I had such high hopes for West’s story I can’t help but feel a bit disappointed. Hello Stranger is still my favorite Ravenel book, no question. 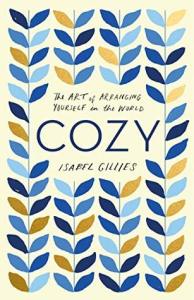 When we talk about being cozy, most of us think of a favorite sweater or a steaming cup of tea on a rainy day. But to Isabel Gillies, coziness goes beyond mere objects. To be truly cozy, she argues, means learning to identify the innermost truth of yourself and carrying it into the world, no matter your environment.

From old family recipes and subway rides to jury duty and hospital stays, in Cozy Gillies shows readers that true ease stems not from throw pillows and a candle, but from opportunities to feel that we are part of something bigger than ourselves, and learn to make ourselves at home no matter where we are.

This book could also be subtitled, ‘How to be Cozy Anywhere’. According to Gillies cozy is more than hot tea and fuzzy slippers, it’s knowing what calms and centers you. She finds it both in places you would expect (baths) and places you don’t (jury duty). If I had to boil it down I’d say that

The book starts on a personal scale then broadens out to feeling cozy in your home and in your community. She emphasizes that we’ll all find different things comforting, and that part of the journey is figuring out what’s cozy to us. Instead of ‘this is cozy, do this,’ it’s ‘these things work for me, your mileage may vary.’

I’m thankful for that, and it did get me thinking about what I find cozy. There’s curling up with a blanket and a good book and preferably a cat, of course. Fresh flowers on my desk. Libraries. I think Gillies and I would agree on these points. But she finds walks with friends cozy, while I would much rather go on treks across town by myself. And that’s fine.

While some of the things she mentions can be enjoyed for free many require disposable income, free time, or comfortable circumstances, and Gillies acknowledges that not everyone has those things. She’s also quite determined to find cozy in the most trying circumstances, and I personally draw the line at when you’re sick and in pain in a hospital waiting room. She concludes that the nurses’ scrubs looked soft and therefore cozy, but… yeah.

The most valuable thing I got from this book is that it shifted my perception of cozy towards situations as well as things. Tea and my reading chair are cozy, for sure, but so is visiting the library and going to the florist to pick out a flower for my desk. So while not life-changing, this book did make me more open to seeing the cozy around me and more comfortable making my own. 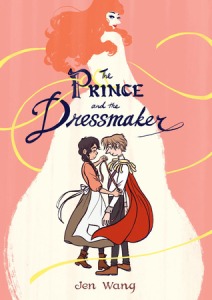 Prince Sebastian is looking for a bride―or rather, his parents are looking for one for him. Sebastian is too busy hiding his secret life from everyone. At night he puts on daring dresses and takes Paris by storm as the fabulous Lady Crystallia―the hottest fashion icon in the world capital of fashion!

Sebastian’s secret weapon (and best friend) is the brilliant dressmaker Frances―one of only two people who know the truth: sometimes this boy wears dresses. But Frances dreams of greatness, and being someone’s secret weapon means being a secret. Forever. How long can Frances defer her dreams to protect a friend?

It’s been a long time since I’ve read a graphic novel in English, and a single-volume, full-color graphic novel at that. But I visited my mom’s local library on a trip home and this beauty called out to me from the shelf. It was fun to read while sitting on the floor of my childhood bedroom.

I’m not sure I’m the best person to review it, though, because I have so little to compare it to. I like the art, the story is stinkin’ cute, and I blew through it in one setting. The queer factor is a plus, too. The only major drawback is that while the art suggests a historical setting the dialogue does not. The conflicting messages messed with my brain.

For now I can recommend The Prince and the Dressmaker as a quick, fun read, but I’ll need few more graphic novels under my belt before I feel comfortable calling it great. 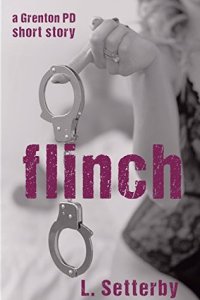 David Bourdon isn’t over his ex.

He misses their old life. He misses Ann-Marie’s laugh, her sultry voice, the way she swears like a sailor.
He had good reasons for leaving her. She can do better than him. He’s fucked up; she’s not.

But now Ann-Marie wants him back. On one condition: he has to be honest with her, for the very first time. About what he likes. What he wants her to do to him.

He thought leaving her took all the courage he had. He was wrong.

I’m not a big short story person when it comes to romance, but Wendy the Super Librarian loves Setterby and suggested Flinch as an introduction to her work. And who am I to complain when it’s free and I have a long flight ahead of me?

On the good side, masochistic men are thin on the ground so I’m glad to see one as the hero. The writing is fine, the sex scene is fine, it’s.. fine.

Flinch didn’t blow my mind, but it’s unfair to expect that at this length.  I liked it enough enough to try out Setterby’s novels in the future, so there’s that.

Twisted Wishes bass player Mish Sullivan is a rock goddess—gorgeous, sexy and comfortable in the spotlight. With fame comes unwanted attention, though: a stalker is desperate to get close. Mish can fend for herself, just as she always has. But after an attack lands her in the hospital, the band reacts, sticking her with a bodyguard she doesn’t need or want.

David Altet has an instant connection with Mish. A certified badass, this ex-army martial arts expert can take down a man twice his size. But nothing—not living as a trans man, not his intensive military training—prepared him for the challenge of Mish. Sex with her is a distraction neither of them can afford, yet the hot, kink-filled nights keep coming.

When Mish’s stalker ups his game, David must make a choice—lover or bodyguard. He’d rather have Mish alive than in his bed. But Mish wants David, and no one, especially not a stalker, will force her to give him up.

What a wonderful end to an amazing series!

I’m both sad to see this series end and excited to see what Zabo does next – it appears that Twisted Wishes’ opening band could get its own spin off series and I hope it does, and soon!

Thanks to Carina Press and NetGalley for providing a review copy.