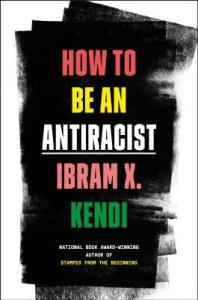 Ibram X. Kendi’s concept of antiracism reenergizes and reshapes the conversation about racial justice in America–but even more fundamentally, points us toward liberating new ways of thinking about ourselves and each other. In How to be an Antiracist, Kendi asks us to think about what an antiracist society might look like, and how we can play an active role in building it.

In this book, Kendi weaves together an electrifying combination of ethics, history, law, and science, bringing it all together with an engaging personal narrative of his own awakening to antiracism. How to Be an Antiracist is an essential work for anyone who wants to go beyond an awareness of racism to the next step: contributing to the formation of a truly just and equitable society.

I first heard Kendi on the WNYC show On the Media being interviewed by Brooke Gladstone. He blew my mind twice in ten minutes so I knew I had to pick up How to Be an Antiracist.

The core tenet is that there is no such thing as being “not racist”. You either support and/or abide policies and actions that further racial inequities, as a racist, or you confront them, as an antiracist. Doing nothing, saying you’re “not racist”, only furthers the racist status quo.

Kendi breaks down a bunch of big ideas such as dueling consciousness and race as a construct, while interweaving stories from his own life. We watch him grow up from a boy who parrots the questionable ideas the world has taught him, to holding anti-white racist views in college, to appreciating and later fighting for not just antiracism but for those who fall at intersectionalities between race and gender, ethnicity, sexuality, and more. He’s not afraid to share ugly thoughts he’s had and how he worked past them – this is a man who has done the work and has the receipts.

The first few chapters of the book cover big concepts and I went through them slowly to take everything in. Once these basic concepts are set he talks about subsets and nuances before widening back out to end on the ideas of success and survival.

My ereader is chock-a-block with highlights – Kendi says so many things that are thoughtful and get at the core of an issue. He argues that antiracism and anticapitalism go hand in hand. That the idea that Black people can’t be racist is absurd. That racist ideas are born not of ignorance and hate but self-interest, and that holding up a mirror can be much more effective than trying to persuade those who support racist policies. You may not agree with every point but they are all presented clearly and grounded in history.

The historical overviews in the middle of each chapter may have been my favorite sections. Kendi summarizes history and scholarship in a way that provides all the essential details without being didactic. Sometimes I wanted to know more but I’m more than happy to read other books about the movements and people he mentions.

<i>How to Be an Antiracist</i> is an in-depth examination that encourages all of us, regardless of race and level of knowledge, to do our part to stamp out racism. I am thankful to Kendi for writing about his life experience and scholarship so openly and honestly, and now I’m looking forward to reading his other book, Stamped from the Beginning. I feel a bit changed inside, for the better.