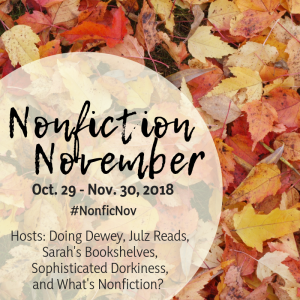 And we’re off!  The prompt this first week concentrates on our last year of nonfiction reading.  In 2018 23% of the books I’ve finished are nonfiction. I have an unofficial goal of one third nonfiction so I’m a bit behind, but that’s what this readathon is for!  Without any further ado let’s jump into the questions:

What was your favorite nonfiction read of the year?

It’s a hard choice, but I’ll have to go with Command and Control: Nuclear Weapons, the Damascus Accident, and the Illusion of Safety by Eric Schlosser. The history of nuclear weapons, already harrowing, is interleaved with a narrative retelling of a Titan II missile accident.  The storytelling and pacing are right on and I was riveted throughout the 20 hour audiobook.  With all the nuclear accidents and near misses the world should be blown up several times over by now!

Do you have a particular topic you’ve been attracted to more this year?

I did a bit of a Serial Killer Summer™ so I read a bunch of nonfiction in that vein, including Whoever Fights Monsters: My Twenty Years Tracking Serial Killers for the FBI by Robert K. Ressler and Tom Shachtman, I’ll Be Gone in the Dark: One Woman’s Obsessive Search for the Golden State Killer by Michelle McNamara, and Dead Girls: Essays on Surviving an American Obsession by Alice Bolin.

What nonfiction book have you recommended the most? 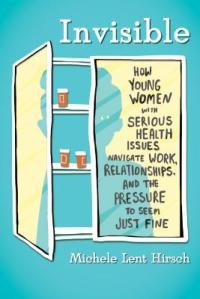 That has to be Invisible: How Young Women with Serious Health Issues Navigate Work, Relationships, and the Pressure to Seem Just Fine by Michele Lent Hirsch. It’s intersectional as all get out and touches on many topical issues but boils down to navigating the world as a person of color, lgbtqia+ folx, someone with a chronic or invisible illness, and combinations thereof.  The book is own voices for lgbtqia+ and chronic/invisible illness and all the more impactful for it.

What are you hoping to get out of participating in Nonfiction November?

This is my second year so I know how much fun is waiting for me this time!  I’m looking forward to talking and becoming friends with all sorts of people while reading all.the.nonfiction!  I’m also thrilled to be participating via my channel on YouTube for the first time.

Here’s to an amazing November!

40 thoughts on “Nonfiction November – Your Year in Nonfiction”