Danika Brown knows what she wants: professional success, academic renown, and an occasional roll in the hay to relieve all that career-driven tension. But romance? Been there, done that, burned the T-shirt. So Dani asks the universe for the perfect friend-with-benefits—someone who knows the score and knows their way around the bedroom.

When brooding security guard Zafir Ansari rescues Dani from a workplace fire drill gone wrong, it’s an obvious sign: PhD student Dani and ex-rugby player Zaf are destined to sleep together. But before she can explain that fact, a video of the heroic rescue goes viral. Now half the internet is shipping #DrRugbae—and Zaf is begging Dani to play along. Turns out, his sports charity for kids could really use the publicity. Lying to help children? Who on earth would refuse?

I love Hibbert’s novels. She does so many things right – rep of all sorts (as evidenced by own voices reviews), characters who use their words and treat each other with respect, and comedy. She also does angst well but alas, angst isn’t my thing. As a result I love her fun, rompy novels like the mega hit Get a Life, Chloe Brown and have complicated feelings about the rest.

I want to be clear, Take a Hint is a very good book. The first third is full of laugh out loud fun – Dani making entreaties to a sex goddess with her bestie, banter, a routine evacuation drill that goes wrong and leaves Dani stranded in an elevator. Zafir, former rugby player turned building security guard, carries her out of the building Cinderella style and #DrRugbae is born. Everyone thinks they’re a couple, and Zafir could use the publicity to promote a charity he runs, so would Dani continue the fake relationship for a good cause. Of course. It’s not like Zafir isn’t tall, dark, and handsome. And definitely not kind. Nope.

If you like more angst in your romance you will love where Take a Hint, Dani Brown ends up. It’s not my thing so I didn’t like this one quite as much as Chloe’s installment, but it’s easy to recognize all that Hibbert is doing right and I love where she went at the end. I’m sad that there’s only one Brown sister left.

Thanks to Avon and Edelweiss for providing an advance copy. 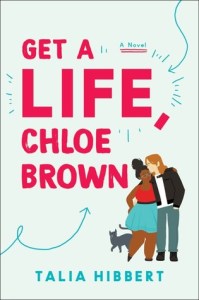 Chloe Brown is a chronically ill computer geek with a goal, a plan, and a list. After almost—but not quite—dying, she’s come up with seven directives to help her “Get a Life”, and she’s already completed the first: finally moving out of her glamorous family’s mansion. Another item? Do something bad. What Chloe needs is a teacher, and she knows just the man for the job.

Redford ‘Red’ Morgan is a handyman with tattoos, a motorcycle, and more sex appeal than ten-thousand Hollywood heartthrobs. He’s also an artist who paints at night and hides his work in the light of day, which Chloe knows because she spies on him occasionally. Just the teeniest, tiniest bit.

But when she enlists Red in her mission to rebel, she learns things about him that no spy session could teach her. Like why he clearly resents Chloe’s wealthy background. And why he never shows his art to anyone. And what really lies beneath his rough exterior…

Trigger warning for discussion of a previous abusive relationship.

How I love this book. Let me count the ways.

I inhaled Get a Life, Chloe Brown during a 24 hour readathon and have no regrets on the binge. It’s an easy recommendation for almost any romance fan, as well as for those who are thinking about getting into the genre.

Thanks to Avon and Edelweiss for providing a review copy. 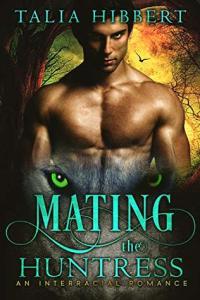 Chastity Adofo knows a monster when she sees one. As soon as Luke Anthony wanders into her family’s coffee shop, she recognises the evil lurking beneath his charming smile and fantastic arse. The handsome werewolf is determined to have her—but she’s determined to cut out his heart.

Little does she know, Luke’s plans for her are far more pleasurable than murder. And when the full moon rises, all bets are off…

I’ve enjoyed Hibbert’s writing in the past but each of the two novels I read had something that was not my thing.  In Bad for the Boss it was a suspense storyline I could have done without, and The Princess Trap had some triggering subjects discussed in the here and now, which I need to prepare my heart for.

Mating the Huntress, however, is good paranormal fun.  Chastity comes from a family of werewolf huntresses but hasn’t been allowed to face them herself.  Luke runs into her scent by chance, realizes they’re mates, and manufactures a meeting.  Chas goes along because she sees her chance for her first kill, and also ’cause he’s kinda cute.

It’s hard to say more because this is a novella and while the story didn’t feel overstuffed I wanted more pages.  I wanted a B plot, more characterization, and the world building could use some fleshing out.  Interesting elements are teased, but there’s no room to expand on them.

There’s lots to like, and lots that makes it a quick, easy read – interracial romance by a black woman author, all kinds of consent all over the place, and genuinely funny exchanges that may leave you cackling.  It helped me forgive the fated mate storyline and shorter page length.  I would love to see Hibbert build out a paranormal world from zero over the course of a series – Mating the Huntress is a start but I would love to see something with more depth. 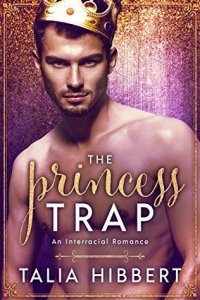 Prince Ruben of Helgmøre knows exactly what he wants—and his current obsession is Cherry Neita. Everything from her rollercoaster curves to her fearsome attitude commands his attention. And best of all? She has no idea who Ruben is.

Until the paparazzi catch them in a dark alley, her scarlet lipstick smudged, and his hands somewhere naughty…

All Cherry wanted was a night or two with the hottest man she’d ever seen. Turns out, that man is actually a prince, and now he needs her to play princess. Well, princess-to-be. One year as his fake fiancée, and he’ll make all her problems disappear. Easy. Right?

Trigger warning for child abuse and domestic abuse as well as some racist remarks.

At one point I was reading five books, none of them romance. (I don’t know how it happened, either.)  So as soon as I finished one I dove into my digital to-be-read pile and came up with The Princess Trap.

The last Hibbert book I tried to read opens with scenes of abuse and I had to put it down.  I’m okay with mentions, especially when they’re of past events, but extended scenes told in the present tense are hard for me to read.  Luckily the opening of this book is fine – heroine working at a job she doesn’t care for meets a “hidden royalty” hero, sparks fly, etc.  Being discovered in a compromising pose leads to an engagement of convenience, jetting to an island kingdom, and some steamy scenes as they fall in love.

So lots of good stuff.  The author is a woman of color, the relationship is interracial, the hero is bisexual, and side characters indentify as LGBTQIA+ in slick, ‘this is totally normal’ ways. 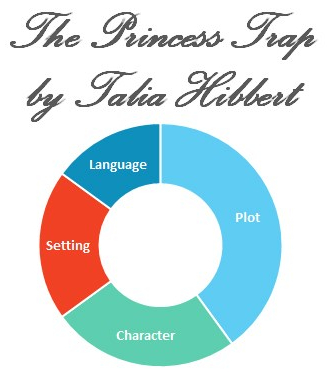 Further on in the book, though, we flashback to child abuse (present tense), domestic violence is insinuated, and we see the aftereffects of more child abuse to a different character.  As a result I struggled.  I love that the author has hotline numbers and encouraging words in the acknowledgements, and the whole situation is handled incredibly well, but still.  I had a hard time getting through.

The only other thing that bothered me was the hero’s convenient BDSM-lite.  It allowed him to show an alpha side early on and hint at delicious wickedness, but it wasn’t revisited after the first sex scene.

Despite the personal minuses I still started and finished The Princess Trap within 24 hours, so… ~shrug~.  I learned my lesson though – I’ll be checking reviews for trigger warnings before I pick up another book by this author, as much as I like her work. 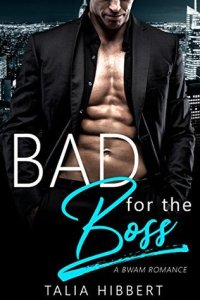 Theodore Chamberlain is notorious for his razor-sharp focus, his terrifying temper, and his anti-social tendencies. What most people don’t know is that the powerful businessman is just as demanding in the bedroom as he is at the office.

So when model employee Jennifer Johnson stumbles into his life, Theo turns his infamous intensity towards a masterful seduction. The plus-sized knockout may be the office’s angel, but only Theo sees the flames simmering beneath.

Jen knows better than to risk the job she desperately needs for a relationship that can’t last. But when a threat from her dark past surfaces, Theo overturns her protests to protect her from the danger.

Is this a perfect romance?  No, not at all.  But it’s working to fix some of the ills in the genre, especially the “rich guy/younger gal” type, so I forgive it completely.  I mean, check all this out:

The not so good:

So while Bad for the Boss isn’t in my wheelhouse I still gobbled it up.  I’m not sure I’ll like the next book in the series (ex-con-turned-author really isn’t my thing) but I’ll be looking out for this author all the same.