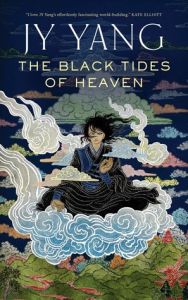 Mokoya and Akeha, the twin children of the Protector, were sold to the Grand Monastery as children. While Mokoya developed her strange prophetic gift, Akeha was always the one who could see the strings that moved adults to action. What’s more, he saw the sickness at the heart of his mother’s Protectorate.

A rebellion is growing. The Machinists discover new levers to move the world every day, while the Tensors fight to put them down and preserve the power of the state. Unwilling to continue to play a pawn in his mother’s twisted schemes, Akeha leaves the Tensorate behind and falls in with the rebels. But every step Akeha takes towards the Machinists is a step away from his sister Mokoya. Can Akeha find peace without shattering the bond he shares with his twin sister?

I’ve been wanting to read more nonbinary authors and this book looked fascinating, taking place in a fantasy world where children are born without gender.  By puberty most pick the gender that suits them and switch from they/them to he/him or she/her pronouns.  I love the idea and how it’s executed.

The world building is good and sucked me in from the beginning.  Set in Asia with elements from several cultures there’s a magic system and fantastic creatures that are explained without being overwrought.  Yang strikes this balance by throwing in just enough of the familiar (elemental forces, phoenixes, etc.) and it works with the lower page count.

The plot, however, left me less satisfied as time went on.  In order to cover 35 years there are large jumps in time and while some work, especially while the twins are younger, the later skips left me wanting.  It seems like a lot should have happened to Akeha in six or twelve years, but not all that much changes, considering.  I especially would have liked to see how his relationship with Yongcheow evolved instead of just the beginning and end points.

While there’s a Big Happening at the end it’s not a resolution while also not being a cliff hanger.  Gah.  In sum I like the world, I like what Yang is doing and how they’re doing it, but the story doesn’t quite work for me at novella length.