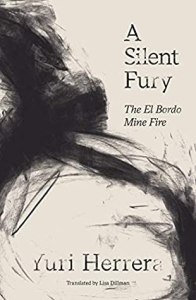 The alert was first raised at six in the morning: a fire was tearing through the El Bordo mine. After a short evacuation, the mouths of the shafts were sealed. Company representatives hastened to assert that “no more than ten” men remained in the shafts at the time of their closure, and Company doctors hastened to proclaim them dead. The El Bordo stayed shut for six days.

When the mine was opened there was a sea of charred bodies—men who had made it as far as the exit, only to find it shut. The final death toll was not ten, but eighty-seven. And there were seven survivors.

Now, a century later, acclaimed novelist Yuri Herrera has carefully reconstructed a worker’s tragedy at once globally resonant and deeply personal: Pachuca is his hometown. His sensitive and deeply humanizing work is an act of restitution for the victims and their families, bringing his full force of evocation to bear on the injustices that suffocated this horrific event into silence.

I jumped at the chance to read this book because I love Herrera’s novel Signs Preceding the End of the World, and I’m always excited to read nonfiction in translation. And read that jacket copy above – mine disaster! Intrigue!

I expected a wild ride but the book is subdued. An exhaustive investigation of the circumstances is impossible 100 years after the disaster so Herrera does the next best thing, critically examining the records left behind.

After outlining the sequence of events as well as we can know them, he looks at what isn’t in the record. How the stories of relatives, often women, are replaced with legalese. What the judge didn’t order investigated. How newspaper accounts were riddled with bias, to the point of obscuring all fact.

The book is a mere 120 pages long and as I reached the end I realized I probably read it too quickly. Some themes I picked up right away – how women were silenced and pushed aside, for example – but others I missed until the very end. Why didn’t I notice the pattern of Anglo names? Did I glance over something early that pointed to the fact that the mine was owned by a US company?

I’ll have to read this book again, at a slower pace, to pick up everything Herrera is putting down. If you’re expecting narrative twists and definite answers you’ll be disappointed. But if you don’t mind following the author has he wipes a century’s worth of dust off of a supposedly settled case he has interesting things to say.

Thanks to And Other Stories and Edelweiss for providing an advance copy.