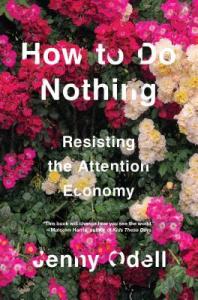 When the technologies we use every day collapse our experiences into 24/7 availability, platforms for personal branding, and products to be monetized, nothing can be quite so radical as… doing nothing. Here, Jenny Odell sends up a flare from the heart of Silicon Valley, delivering an action plan to resist capitalist narratives of productivity and techno-determinism, and to become more meaningfully connected in the process.

Reading How to Do Nothing was an odd experience, mostly because I was intensely interested in some sections and was utterly bored through others. It didn’t feel coherent, which is weird and unfortunate because Odell obviously put a lot of thought into each chapter.

She starts by pointing out that social media and apps that increasingly demand our attention have changed the way we think, work, and spend our time. We aim for productivity, work in a gig economy, and scroll through addictive feeds while simultaneously feeling more worried about and separate from the world around us. After explaining the impossibility of running away completely she touches on ways we can refuse the attention economy, how to open ourselves to new ways of seeing, and the importance of connecting with where we live – its history, ecology, and the fellow humans living there.

Odell discusses some amazing concepts, and some will stick with me. There’s the idea that we can different people in different real-life groups – a happy drunk with college friends, a hard-working professional with coworkers, an erudite conversationalist at a dinner party. Once you put yourself on social media, however, you’re the same person to everyone from childhood friends to potential employers. As a result you have to water yourself down to the most innocuous version, else risk offending someone today or years down the line. You go from many identities to just one.

There’s the thought that algorithms on Facebook and Spotify do such an amazing job of predicting what you’ll like that it’s unlikely you’ll try something new or find a favorite song in a genre you usually don’t listen to. That we’re constantly pressured to be more productive… but who does that productivity serve?

They’re fascinating ideas to think about. Some chapters, though, are duds for me. I did not need to read dozens of pages about why various communes failed in the 1960s. I also didn’t like the long descriptions of paintings and performance art. I flashed back to reading Sara Baume’s A Line Made by Walking, but this is nonfiction and the writing isn’t as strong.

As a result I’m a fan of the concepts but not of the telling, and the dead boring sections prevent me from giving it anything more than three stars.