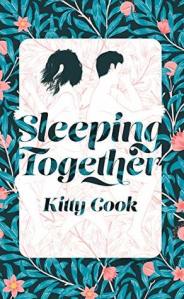 Vanessa Brown is having nightmares ever since her husband, Pete, mentioned he wanted to start a family. So when she catches her slacker-cool coworker, Altan Young, stealing sleeping medication from the pharmaceutical company they both work for, she decides to try the pilfered pills to finally find some rest.

But side effects of Morpheum include possible mind melding—a fact Ness and Altan stumble upon when they share the same freaky sex dream. (Awkward.)

With the stress of being caught between the men of her literal and figurative dreams (not to mention her nightmare of a boss), Ness starts to enjoy snoozing more than being conscious—and the company of her work husband more than her real one. If she doesn’t wake up and smell the coffee soon, her dreamy escape could become a dirt nap in this feisty debut novel about the dark side of dreams’ coming true.

I picked up this book because it was listed as “Romance/Women’s Fiction” on NetGalley but has decisively unromantic jacket copy. I’ve seen left-my-husband-for-a-better-guy story lines work before, usually because the husband is awful and undeserving of his lovely wife, and I was curious to see how it would be handled here with a science fiction twist.

Vanessa and her lawyer husband are going through a rough patch because he wants to have kids and she doesn’t for reasons connected with being gang raped in college. She hasn’t told him this, though, so he becomes understandably frustrated with her elliptical reasoning.

She’s stressed so when she catches her kinda handsome coworker Alton stealing experimental sleeping pills from work she takes some, hoping she’ll find peace. Instead Vanessa and Alton end up having hot, sexy, shared dreams.

Up to this point I’m not thrilled, but I’m mostly okay. Vanessa desperately needs to see a professional to work through past trauma, but I get that she may not be ready or able to do that. She has a loving husband who is doing his best to meet her in the middle, and there’s one episode of dream sex before Alton and Vanessa realize the dreams are shared, but then they stop. We’re still in romance territory, even if it’s a bit darker than my usual.

But after that things pile up plot-wise. It ends up being a story of addiction, full stop. Vanessa spends more and more time asleep, traversing dreamscapes with Alton while ignoring her sweet, reasonable husband at every turn. Her boss makes work a living hell complete with sexual assault, she cannot function without taking the drug every night, and it becomes a story of adultery and being tempted by a young, unproven guy over the husband who has treated her amazingly well and whom she still feels a deep love for.

One common definition of a romance is that it’s a story where people form a loving relationship while overcoming difficulties. This, however, is a woman falling into the dark pit of addiction and finding a somewhat handsome guy at the bottom. She needs all kinds of help, help that her husband is ready to find and provide, but running off with the guy who for all intents and purposes is her drug dealer is more appealing.

I feel like Cook is trying for a hopeful, happily-ever-after-for-now ending but I don’t buy it. Vanessa doesn’t learn anything and runs away from problems without solving them. She still needs to get clean and doesn’t have much desire to do so. She throws away one of the few good things in her life… and this is the uplifting ending. GAH.

Those are the plot problems, but I have more. I am not a fan of the writing. Cook drops similes all over the place and they’re weird and distracting rather than insightful. Characters quoting movie lines at each other is seen as the highest form of humor. It’d make sense in YA, maybe, but not here.

The cast of characters is small considering the page length, and even so the only one that’s fully developed is Vanessa. Alton turns from an annoying, coarse, “slacker cool” guy in real life into the sweetest guy in her dreams (literally). There’s no trigger for this change other than the fact that it’s more socially acceptable to flirt with a married woman in dreams than reality. It calls to mind the YA trope of guys being borderline mean to girls because they “like her so much”, which is kind of toxic and definitely not my thing. Also, his entire personality can be summed up in three simple traits, which isn’t a good look for a main character.

On top of all this the end of the book ignores a whole bunch of stuff. Questions are left unanswered, relationships are tossed up in the air, and narrative threads are dropped never to be picked up again. This is the first in a series but the teaser for book two hints that it’ll be with different characters, so I’m not sure what the end game is here.

All of that being said, there is some good stuff here, especially in the first couple of chapters. I appreciate Cook examining the dynamic of a relationship where one partner wants kids and the other doesn’t. She also explores the differences in how men and women approach the world with regard to their personal safety. It was a bit too on-the-nose by the end for me, but some of the beginning parts are well done.

Overall I’m mad this was in the romance section because it’s not a romance, but putting that aside I don’t consider it a successful work of general fiction, either. Only pick it up if it’s exactly your thing and you can get along with the trigger warnings.

Thanks to Brass Anvil Books and NetGalley for providing a review copy.

2 thoughts on “Sleeping Together by Kitty Cook (Perfect Drug #1)”