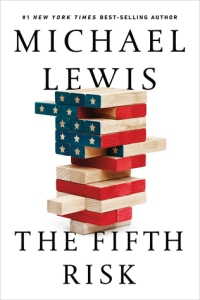 What are the consequences if the people given control over our government have no idea how it works? Across all departments, similar stories were playing out: Trump appointees were few and far between; those that did show up were shockingly uninformed about the functions of their new workplace. Some even threw away the briefing books that had been prepared for them.

Michael Lewis takes us into the engine rooms of a government under attack by its own leaders. In Agriculture the funding of vital programs like food stamps and school lunches is being slashed. The Commerce Department may not have enough staff to conduct the 2020 Census properly. Over at Energy it’s not clear there will be enough inspectors to track and locate black market uranium before terrorists do.

If there are dangerous fools in this book, there are also heroes, unsung, of course.  Michael Lewis finds them, and he asks them what keeps them up at night.

This is my first book by Michael Lewis but by all rights it shouldn’t be, considering that he’s written Moneyball and The Big Short. Here he looks at how three government agencies have transitioned from the Obama administration to the Trump administration.

In a book slim enough to feel like three extended essays Lewis goes over the highly varied missions of three federal agencies, what they normally do, and how that’s all been turned upside down by the incoming administration. Remember the news stories about the Trump transition being anemic and ill-planned? We see all of that in its full glory.

But it’s more than tales of woe. Lewis also highlights former administrators and the work they did fixing government. You’ve probably never heard of them, but they’ve kept the rusty wheels of bureaucracy turning with smarts and a dedication to public service. It’s inspiring how many people work for the government with this sense of duty.

And the potential disasters that keep them up at night can be truly frightening – misjudging North Korea and inadvertently starting a war, nuclear waste flowing into a major river due to poor storage. Others “merely” bode poorly for our long term prospects, like the lack of funding for cutting-edge scientific research.

Other than these facts, what struck me most is Lewis’ assured and slightly casual writing style. It never felt academic and always welcomed me back to the page.

At the same time, I can’t say I’m blown away. It’s an interesting and well-written book but it will fade from memory all too soon, which is a shame considering the subject area.

2 thoughts on “The Fifth Risk by Michael Lewis”