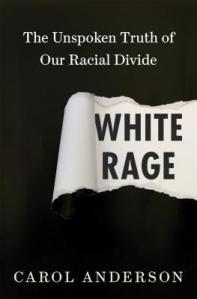 Since 1865 and the passage of the Thirteenth Amendment, every time African Americans have made advances towards full participation in our democracy, white reaction has fueled a deliberate and relentless rollback of their gains. The end of the Civil War and Reconstruction was greeted with the Black Codes and Jim Crow; the Supreme Court’s landmark 1954 Brown v. Board of Education decision was met with the shutting down of public schools while taxpayer dollars financed segregated white private schools; the Civil Rights Act of 1964 and Voting Rights Act of 1965 triggered the so-called Southern Strategy and the War on Drugs that disenfranchised millions of African Americans while propelling presidents Nixon and Reagan into the White House.

Anderson pulls back the veil that has long covered actions made in the name of protecting democracy, fiscal responsibility, or protection against fraud, rendering visible the long lineage of white rage.

When I was taught African-American history in school the overall impression was that things were bad, but courts or Congress would swoop in and save the day.  There was segregation… but the Supreme Court fixed it!  There were racist policies like poll taxes and literacy tests… but they were made illegal!

For example, I knew about redlining, where non-whites would be directed to housing in certain (poor) districts, creating de facto segregation at the neighborhood level. It was taught in an economic, almost geometric sense in the classroom, but Anderson shows us how slow things were to change for the better via the story of Dr. Ossian Sweet.

A successful Howard-trained doctor, he and his family moved into a bungalow in a white, working class neighborhood in 1925.  The next day hundreds of people formed a mob around his house while the police watched from a distance, even when rocks were thrown.  When the mob rushed the house some men inside, including Sweet’s brothers, grabbed guns and fired into the crowd. At this point the police arrested the entire Sweet family and the friends that had come to support them… not the mob. Natch.

Two white men were dead, the police downplayed the mob, and witnesses perjured themselves to high heaven.  It took two trials to settle the matter, and while the Sweets were eventually acquitted the doctor’s brother, wife, and baby daughter all contracted tuberculosis while in jail and died. Dr. Sweet did his best to carry on but he lost his house, was forced to move back into a redlined district, and completed suicide.  It’s the first time I’ve read about the human dimension that goes along with the awful policy.

Winning a court battle, even at the Supreme Court level, did not bring the instant, inevitable change I was lead to believe.  Every right won had to be fought for again, and the lives ruined and potential lost in that time is immeasurable.  A quick look at the most recent US election shows that the cycle is still going strong – a white candidate for Georgia governor used his position as Secretary of State to disenfranchise African Americans at every turn.  The gutting of the Voting Rights Act several years ago meant that polling stations in African American neighborhoods could be closed with short notice and photo IDs could be made mandatory to vote. And until a few days ago former felons in the Sunshine State lost the right to vote for life.

In Florida, stunningly, felonies are not confined to burglaries and robberies but include offenses such as letting a helium balloon float up in the air, walking through a construction zone, or “catching lobsters with tails too short.”

My reading experience was good, if you can call being infuriated, shocked, and heart-broken in turns counts as good.  Everything is meticulously researched with end notes to match, and while I had trouble getting into the first chapter or two the rest flew by.

I’m grateful for a look at African American history through this specific lens, and I look forward to Anderson’s next book, One Person, No Vote: How Voter Suppression is Destroying Our Democracy.

You may also enjoy:

3 thoughts on “White Rage: The Unspoken Truth of Our Racial Divide by Carol Anderson”