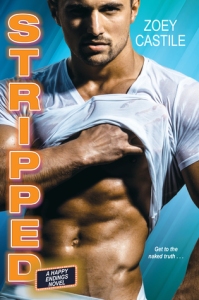 The day Robyn Flores meets Zac Fallon is one of those days. You know, when you’re already late for work. Mostly because you haven’t really slept since your best friend abandoned you for her fiancé and her exponentially better life. The kind of day you drag yourself to the cleaners to pick up your laundry, only to discover you’ve got the wrong bag—Star Spangled sequined thong, anyone? So Robyn is definitely not ready for the ridiculously gorgeous guy at her front door, except that they have each other’s clothes. But then, is any woman ever ready to meet the love of her life?

Trigger warnings for incidental drug use and likely depression.

If you’re looking for a rom-com movie of a romance novel this may be just the thing.  Robyn is a 5th grade teacher that falls for her neighbor Fallon after a meet cute over a star spangled, sequined thong.  Imagine her surprise when a bunch of strippers arrive at her friend’s bachelorette party and he is one of them.

If the Magic Mike-esque premise of Stripped is in your romance catnip I’m sure you’ll overlook my quibbles and love it.  I’m not the biggest contemporary person so I didn’t outright love it but I’m curious to read the upcoming book, Hired, and see how Castile grows as a writer.  An okay effort.