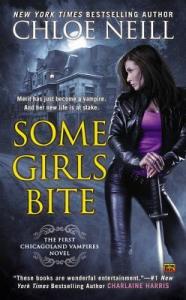 Sure, the life of a graduate student wasn’t exactly glamorous, but I was doing fine until Chicago’s vampires announced their existence to the world. When a rogue vampire attacked me, I was lucky he only got a sip. Another bloodsucker scared him off and decided the best way to save my life was to make me the walking undead.

Now I’ve traded sweating over my thesis for learning to fit in at a Hyde Park mansion full of vamps loyal to Ethan “Lord o’ the Manor” Sullivan. He has centuries’ worth of charm but unfortunately he expects my gratitude—and servitude. Right…

But someone’s out to get me. Is it the rogue vampire who bit me? A vamp from a rival House? An angry mob bearing torches? My initiation into Chicago’s nightlife may be the first skirmish in a war—and there will be blood.

I love vampires.  Not all vampires, mind you, but I never get sick of them, even when the rest of the world decides they’re blasé.  So starting the Chicagoland Vampire series?  It’s like coming home.

That’s it, though.  This is a series I can binge on – great plot with interesting characters and sexy parts with some fights and female friendship thrown in.  A hearty recommend for urban fantasy types, and paranormal romance people will enjoy it, too.