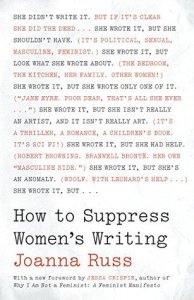 How to Suppress Women’s Writing is a meticulously researched and humorously written “guidebook” to the many ways women and other “minorities” have been barred from producing written art. In chapters like “Prohibitions,” “Pollution of Agency,” “The Double Standard of Content,” “False Categorization,” and “Isolation” Joanna Russ names, defines, and illustrates those barriers to art-making we may have felt but which tend to remain unnamed and thus insolvable.

How to Suppress Women’s Writing can be considered a classic so I’m excited that it’s being re-released.  Written in 1983 and based on academia in the 1970s some parts feel dated but the underlying principles are sadly relevant.  Russ systematically goes through the “reasons” women’s writing has been maligned for centuries – she didn’t write it.  Or she wrote it but she had help, or she only wrote one of it, or she’s an anomaly. (Oh yes, there’s more.)

Each method of suppression gets its own chapter with historical examples of how it was used.  A word of fair warning – it’s on literary criticism and takes for granted that you know your 18th and 19th century writers.  If you’re not familiar ~raises her hand~ the name dropping with minimal explanation can be confusing bordering on annoying.

That doesn’t make the material less fascinating, though.  For example, Russ randomly looked at anthologies and academic lists and found that women accounted for between five and eight percent of writers selected.  You would think that a longer list or larger book could “afford” to include more women but the percentage actually went down with size, not up.  As Russ notes:

It seems that when women are brought into a reading list, a curriculum, or an anthology, men arrive, too – let the number of men drop and the women mysteriously disappear.

She argues further that isolating women in this way makes them look like anomalies and thus more easily minimized and ignored.  Now and then Russ points out that these same methods are used on people of color and other marginalized groups, but doesn’t dive much further until a mea culpa afterward.  I chalk this up to the fact that the book was written over thirty years ago but I was hoping for more intersectionality all the same.

All in all I’m glad I read How to Suppress Women’s Writing and I’m thankful that it’s once again in print – may it supercharge our BS detectors and empower us to fight back.

Thanks to University of Texas Press and Edelweiss for providing a review copy.