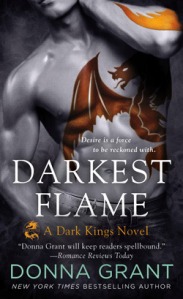 Denae Lacroix is a beautiful MI5 agent on a deadly mission. Sent to the Scottish Highlands to spy on the mysterious Dreagan Industries, she discovers too late that she’s been set up—as human bait. She is an irresistible lure for a man who has not seen or touched a woman for centuries. He is a man with a destiny—and a desire—that could destroy them both…

It’s been twelve hundred years since Kellan has walked among humans—and there’s no denying the erotically charged attraction he feels for Denae. But as a Dragon King, he is sworn to protect his secrets. Yet the closer he gets to this smart, ravishing woman, the more her life is in danger. All it takes is one reckless kiss to unleash a flood of desire, the fury of dragons…and the fiercest enemy of all.

This book, though, I can’t forgive, because the heroine is sexually assaulted by the bad guy in front of the hero.  She’s tied up, stripped naked, and forced to orgasm against her will.

She does have the feelings you would expect after being assaulted, so a point for that, but as soon as the coast is clear she and the hero have sex to clear her system or something.  Gah.

After that all of the other faults grated, including those I was inclined to overlook – instalust, bad phonetic renditions of accents, a fae deus ex machina, and three HEA couples even though this is book one (??) come immediately to mind.  Ugh.

Why Darkest Flame is so highly rated on Goodreads I do not know.  Stay far away, even if you’re in the mood for some crazy.