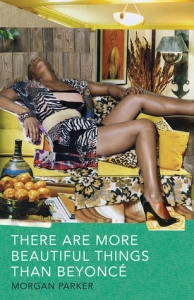 There Are More Beautiful Things Than Beyoncé uses political and pop-cultural references as a framework to explore 21st century black American womanhood and its complexities: performance, depression, isolation, exoticism, racism, femininity, and politics. The poems weave between personal narrative and pop-cultural criticism, examining and confronting modern media, consumption, feminism, and Blackness. This collection explores femininity and race in the contemporary American political climate, folding in references from jazz standards, visual art, personal family history, and Hip Hop. The voice of this book is a multifarious one: writing and rewriting bodies, stories, and histories of the past, as well as uttering and bearing witness to the truth of the present, and actively probing toward a new self, an actualized self. This is a book at the intersections of mythology and sorrow, of vulnerability and posturing, of desire and disgust, of tragedy and excellence.

While I imagined myself a poet in high school (didn’t we all?) I haven’t spent much time with the form since.  Reading Why God Is a Woman reminded me that yes, poetry is awesome!  I picked up There Are More Beautiful Things Than Beyoncé to help understand an experience outside my own, that of an African-American woman today.

There are some political poems (“The President Has Never Said the Word Black“) but the thrust of the work is rooted in pop culture, especially music.  The Beyoncé poems are especially wonderful – here’s the beginning of “Beyoncé On The Line for Gaga”:

Girl you know you ain’t that busy.
Without me            you’re just two earsstuffed with glitter.

Parker manages to be funny and skewering at the same time.  In “Afro” she lists what she’s hiding in her hair, including “buttermilk pancake cardboard… 40 yards of cheap wax prints… blueprints for building ergonomically perfect dancers & athletes”.  And when Parker goes for the jugular she doesn’t miss, like in the first lines of “The Gospel According to Her”:

What to a slave is the fourth of july.
What to a woman is a vote.

Being newly returned to the world of poetry there are some pieces I had a hard time wrapping my mind around.  Maybe it’s a lack or perspective or the wrong mindset, maybe I’m just out of practice.  So if you’re looking for instant clarity you may be disappointed but I’m sure these poems will gain meaning the more time I spend with them.  Good stuff.

Thanks to Tin House Books and Edelweiss for providing a review copy.