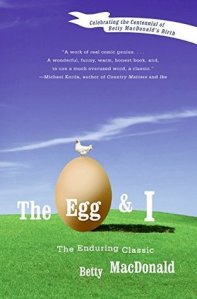 When Betty MacDonald married a marine and moved to a small chicken farm on the Olympic Peninsula in Washington State, she was largely unprepared for the rigors of life in the wild. With no running water, no electricity, a house in need of constant repair, and days that ran from four in the morning to nine at night, the MacDonalds had barely a moment to put their feet up and relax. And then came the children. Yet through every trial and pitfall—through chaos and catastrophe—this indomitable family somehow, mercifully, never lost its sense of humor.

A beloved literary treasure for more than half a century, Betty MacDonald’s The Egg and I is a heartwarming and uproarious account of adventure and survival on an American frontier.

I was excited to find that the author of the Mrs. Piggle Wiggle books wrote a memoir about chicken farming in the Pacific Midwest, complete with “The Enduring Classic” blazed on the cover.  But this doesn’t feel like a classic at all, with MacDonald’s sharp wit aimed at people who least deserve the jabs.

She moved to the wilds of Washington with her husband, determined to be the best wife she can by doing whatever makes her husband happy, no questions asked.  Let’s count that as Anger Runneth Over #1 – woman with zero agency.  She hates the chicken farming her husband loves and seems to find no joy in life on the mountain. Sometimes the barbs are funny and telling of how awful she found things.

In my little Death and Food Record book, I, in my prankish way, wrote opposite the date and number of deaths; “Chickenpox-Eggzema and Suicide.” When he checked the records, Bob noted this fun-in-our-work, and unsmiling erased it and neatly wrote, “Not determined.” Men are quite humorless about their own business.

But these moments are few and far between. More often MacDonald lights into her neighbors and people in town, judging them by her city standards of culture and erudition.  Whole passages are written phonetically to exaggerate their manner of speaking and, apparently, the humor.

Charlie wath butchering and I athk him for the thpare ribth becauthe they kilt two pigth and I knowed that the two of them couldn’t eat all them thpare ribth, but that thtingy thkunk thaid, “The reathon I’M BUTCHERING, MR. KETTLE, is becauthe I need the meat,” and I wath tho mad I forgot the egg math I had borried.

Instead of poking fun at a situation she’s grinding people into the dirt, holding them at fault for being different or not being given the same opportunities she has enjoyed.  This closed mindedness and snobbery is Anger Runneth Over #2.

It’s not that MacDonald is incapable of nuance – if she gave other people the consideration she reserved for her grandmother the book would be much more readable.

Gammy was patient, impatient, kind, caustic, witty, sad, wise, foolish, superstitious, religious, prejudiced, and dear.  She was, in short, a grandmother who is, after all, a woman whose inconsistencies have sharpened with use.

Instead we run into Anger Runneth #3, her view and treatment of the Native Americans of the area.  I went into the book knowing that racism of this sort would be an issue and prepared to see the book as of its time, but it’s hateful and awful even for the 1940s.

Little red brothers or not, I didn’t like Indians, and the more I saw of them the more I thought what an excellent thing it was to take that beautiful country away from them.

It hurts me so much to even type that.

There are a couple of chapters that are funny if separated from all the rage-inducing passages but I doubt it’s worth the effort.  Consider The Egg and I a classic you can safely skip.

6 thoughts on “The Egg and I by Betty MacDonald”