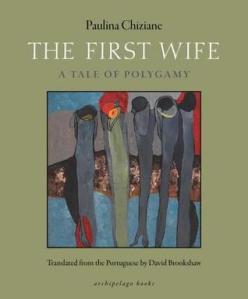 After twenty years of marriage, Rami discovers that her husband has been living a double–or rather, a quintuple–life. Tony, a senior police officer in Maputo, has apparently been supporting four other families for many years. Rami remains calm in the face of her husband’s duplicity and plots to make an honest man out of him. After Tony is forced to marry the four other women–as well as an additional lover–according to polygamist custom, the rival lovers join together to declare their voices and demand their rights. In this brilliantly funny and feverishly scathing critique, a major work from Mozambique’s first published female novelist, Paulina Chiziane explores her country’s traditional culture, its values and hypocrisy, and the subjection of women the world over.

I love fiction that takes me to a place I don’t know and drops me into the thick of things, and The First Wife is a delicious example.

In this book Mozambique’s first published female novelist (you read that right) weaves the story of Rami, wife to Tony and mother to several children.  She thinks she is Tony’s only wife until she discovers a second, who points to a third, all the way down to his fifth and most recent acquisition.  The book follows Rami as she comes to terms with this and brazenly fights for what she wants.

As heavy as it sounds the story is actually light and even comical in places.  At turns in the story I was left laughing while going, “What?!  Really?”

“You modern women are in the habit of feeding men any old way… don’t give them potatoes that have been cooked the previous day, because this swells men’s testicles…”

Over the next few pages reality sets in – yes.  Really.

“In the father’s absence, the eldest male child takes command of the family, even if he’s a baby, he’s leader, he’s the head of the family by substitution.”

In this way the social structure and customs of Mozambique become clear.  We learn the cultural differences between the North and the South, the lives women are expected to lead, how the Portuguese and Christianity changed norms for better and worse.  There’s explanations but it never feels like a textbook, and as a result the lessons are more powerful.

Chiziane’s prose is fresh, flowing in rhythms that delight.  She’s also unabashedly feminist, questioning the system and its logic at every turn.  Rami fights against the customs, doing everything she can to secure the best life for herself and the other wives.  I found myself cheering for her, getting giddy when a bit of revenge hit its mark.  I also wallowed with her in despair, shaking a mental fist at the injustices of the world.

The First Wife isn’t an easy read but I’m so glad I tackled it.  It opened my eyes to part of the world I knew nothing about and taught me things in the close, personal way that fiction can.

Thanks to Archipelago and Edelweiss for providing a review copy.