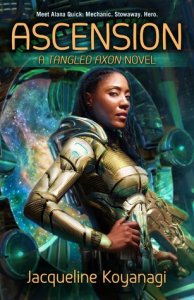 Alana Quick is the best damned sky surgeon in Heliodor City, but repairing starship engines barely pays the bills. When the desperate crew of a cargo vessel stops by her shipyard looking for her spiritually advanced sister Nova, Alana stows away. Maybe her boldness will land her a long-term gig on the crew. But the Tangled Axon proves to be more than star-watching and plasma coils. The chief engineer thinks he’s a wolf. The pilot fades in and out of existence. The captain is all blond hair, boots, and ego . . . and Alana can’t keep her eyes off her. But there’s little time for romance: Nova’s in danger and someone will do anything–even destroying planets–to get their hands on her.

Are you looking for a novel with people of color… in space? How about queer people… in space? Or people dealing with chronic disease… in space?

Ding ding ding! This is your book right here. I liked it for all those reasons and more, but there are some parts I wish were done better.

So as much as I wanted to outright love this book I merely like it. I do hope there’s a sequel so I can see where the characters end up and how Koyanagi’s craft evolves.