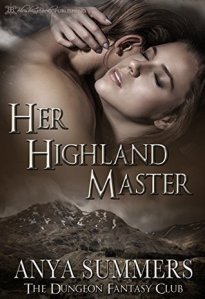 Zoey Mills’s life is in shambles. She’s been accused of leaking her upper crust Hollywood clients’ data to an online magazine for a large payday. After a wine and chocolate-filled evening of drowning her sorrows, she determines that her best course of action is to leave her home in sunny Los Angeles for a week-long vacation in the Scottish Highlands. It’s the only way she can escape from the fact that her image is being splashed across the nightly news – and it might actually give her a chance to consider what her next move should be, now that her Great Master Life Plan has disintegrated into dust.

Unfortunately, she’s only just landed and is navigating the tiny roads in her rental car when a freak early autumn snow storm hits. Zoey finds herself stranded and winds up on the doorstep of Mullardoch Manor; home of the sexy Scotsman, Declan McDougal, who is her every dark fantasy brought to life.

On the surface this should be a “me” story – woman on vacation in Scotland gets caught in a snowstorm and puts her car into a ditch. She finds herself in front of a fancy manor, complete with two crazy hot Scottish dudes and a dungeon in the basement. She’s stuck there for a week – how ever shall she pass the time?

He had loved Jenna. He’d actually picked out a ring. She’d fit in with his lifestyle perfectly and had been his little sub, until she ran off with another Dom from the Club. They both died in a car crash a week later.

The writing is okay and the sex is hot, but the lack of characterization and whiplash plot make this a less enjoyable read.

Thanks to Blushing Books and NetGalley for providing a review copy.