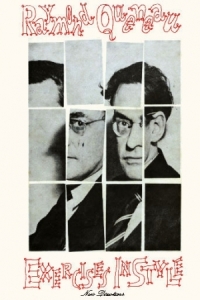 On a crowded bus at midday, Raymond Queneau observes one man accusing another of jostling him deliberately. When a seat is vacated, the first man appropriates it. Later, in another part of town, Queneau sees the man being advised by a friend to sew a new button on his overcoat.

Exercises in Style — Queneau’s experimental masterpiece and a hallmark book of the Oulipo literary group — retells this unexceptional tale ninety-nine times, employing the sonnet and the alexandrine, onomatopoeia and Cockney. An “Abusive” chapter heartily deplores the events; “Opera English” lends them grandeur. Queneau once said that of all his books, this was the one he most wished to see translated. He offered Barbara Wright his “heartiest congratulations,” adding: “I have always thought that nothing is untranslatable. Here is new proof.”

I love authors that treat language like the pliable, plastic thing it is, playing with words just to see what happens. Queneau is a master of it, retelling the same story 99 times in such a way that you never get bored. Some styles are academic (permutations of letters, dropping syllables), others are a change in form (haiku, cross-examination), and yet others luxuriate in sound (homeoptotes, onomatopoeia). All are fun, and many left me giggling to myself (in hospital waiting rooms, no less).

On a certain date, a corporate crate on which the electorate congregate when they migrate at a great rate, late, had to accommodate an ornate, tracheate celibate, who started to altercate with a proximate inmate…

Doesn’t the sound of that make you smile? What’s even more amazing is that this is a translation from the French – Barbara Wright does a stellar job rendering the text in English. I don’t even want to think about how hard it must have been. Her preface is the perfect introduction:

His purpose here, in the Exercises, is, I think, a profound exploration into the possibilities of language. It is an experiment in the philosophy of language. [In a published conversation Queneau] says… “People have tried to see it as an attempt to demolish literature – that was not at all my intention. In any case my intention was merely to produce some exercises; the finished product may possibly act as a kind of rust-remover to literature, help to rid it of some of the scabs.”

I am all for knocking off the rust. Best read in short spurts, this book will delight and entertain and leave you marveling at how the author (and translator) managed it in the first place. A hearty recommend to anyone that doesn’t take reading (or themselves) too seriously.