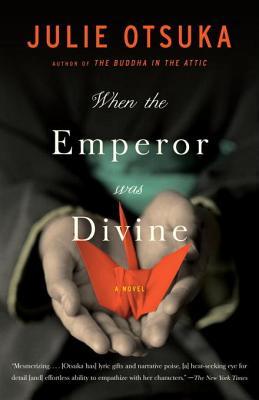 On a sunny day in Berkeley, California, in 1942, a woman sees a sign in a post office window, returns to her home, and matter-of-factly begins to pack her family’s possessions. Like thousands of other Japanese Americans they have been reclassified, virtually overnight, as enemy aliens and are about to be uprooted from their home and sent to a dusty internment camp in the Utah desert.

In this lean and devastatingly evocative first novel, Julie Otsuka tells their story from five flawlessly realized points of view and conveys the exact emotional texture of their experience: the thin-walled barracks and barbed-wire fences, the omnipresent fear and loneliness, the unheralded feats of heroism. When the Emperor Was Divine is a work of enormous power that makes a shameful episode of our history as immediate as today’s headlines.

I was afraid going into this book that it would be heavy, plodding, and soul crushing. Three plus years in an internment camp? How can that be anything but bleak?

Well, it is bleak. But it’s also poetic, full of scenes and images that perfectly illustrate the hell that is a flimsy set of barracks in the Utah desert.

And if your kite got stuck on it?

That was an easy one. You let the kite go.

There were rules about language, too: Here we say Dining Hall and not Mess Hall; Safety Council, not Internal Police; Residents, not Evacuees; and last but not least, Mental Climate, not Morale.

As the story unfolds we learn about the discrimination the family faced, the everyday sort of jabs that they simply navigated around.

[His father] knew which restaurants would serve them lunch and which would not. He knew which barbers would cut their kind of hair. The best ones, of course.

If you look like the enemy, you must be the enemy. It’s a mindset that we haven’t grown out of, though we attribute it more to religion than a particular nationality nowadays. May we never be so shortsighted and stupid to repeat this awful chapter of our history.

I’m the one you see everywhere – the one taking over the neighborhood. I’m the one you dream of all night long – we’re marching ten abreast down Main Street. I’m your nightmare…

So go ahead and lock me up… and if they ask you someday what it was I most wanted to say please tell them, if you would, it was this:

One thought on “When the Emperor was Divine by Julie Otsuka”