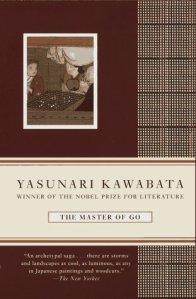 Go is a game of strategy in which two players attempt to surround each other’s black or white stones. Simple in its fundamentals, infinitely complex in its execution, Go is an essential expression of the Japanese spirit. And in his fictional chronicle of a match played between a revered and heretofore invincible Master and a younger and more modern challenger, Yasunari Kawabata captured the moment in which the immutable traditions of imperial Japan met the onslaught of the twentieth century.

Every time I read a Japanese book in translation I’m racked with guilt. My inner critic asks, why aren’t you reading it in the original? You translate, you know how it can completely change the feel of a text. Stop being so lazy!

For this book, I tell myself, the story is more important than the exact language. And it’s a good story – the retirement match of Honnimbou Shuusai, which unfolded over the course of months with much intrigue. Even if you didn’t have a Hikaru no Go obsession in college (guilty as charged) Kawabata explains the game in an easy to understand manner, concentrating on the people and dynamic more than the exact moves. Watch out for Black 121 though, it’s a doozy.

I’m glad I read this classic… now I just need to gather up the courage to tackle Snow Country in the original.