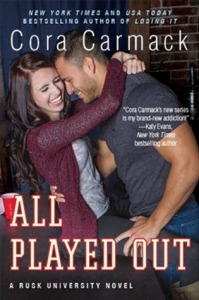 So Nell does what a smart, dedicated girl like herself does best. She makes a “to do” list of normal college activities.

Rusk University wide receiver Mateo Torres practically wrote the playbook for normal college living. When he’s not on the field, he excels at partying, girls, and more partying. As long as he keeps things light and easy, it’s impossible to get hurt… again. But something about the quiet, shy, sexy-as-hell Nell gets under his skin, and when he learns about her list, he makes it his mission to help her complete it.

Torres is the definition of confident (And sexy. And wild), and he opens up a side of Nell that she’s never known. But as they begin to check off each crazy, exciting, normal item, Nell finds that her frivolous list leads to something more serious than she bargained for. And while Torres is used to taking risks on the field, he has to decide if he’s willing to take the chance when it’s more than just a game.

Together they will have to decide if what they have is just part of the experiment or a chance at something real.

If all New Adult were like this I would gobble it up! I’m a sucker for a heroine that figures out what she wants, makes a list, and goes for it – Nine Rules to Break When Romancing a Rake, anyone?

We both have a tendency to focus on achievements, on checking items and goals off a list. And what I’m realizing is that living isn’t about what you achieve, but how you achieve it. We’ve both moved full speed ahead toward the things we want, but I know I hadn’t lived enough to really know what I wanted. In fact, I was spectacularly wrong about most of it.

In chapter one, no less. It’s my single major quibble, though. The only reason this isn’t four stars is that I suspect the book won’t stick in my brain but I’m ready to be proven wrong. Recommended for those who want to try New Adult but have been put off by the angst – this enjoyable read is for you.