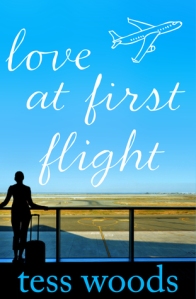 Looking back on it now, I can see it was instant. The second we locked eyes. Boom. Just like that. The me I had spent a lifetime perfecting began its disintegration from that moment. And despite the carnage it brought to all our lives, I still don’t regret it.

What would you risk to be with the love of your life? And what if your soul mate is the one who will destroy you?

Mel is living the dream. She’s a successful GP, married to a charming anesthetist and raising a beautiful family in their plush home in Perth. But when she boards a flight to Melbourne, she meets Matt and her picture perfect Stepford life unravels as she falls in love for the first time ever.

What begins as a flirty conversation between strangers quickly develops into a hot and obsessive affair with disastrous consequences neither Mel nor Matt could have ever seen coming. Mel’s dream life turns into her worst nightmare.

Love at First Flight will take everything you believe about what true love is and spin it on its head.

I entered a giveaway for this book knowing it would be a stretch for me. Adultery, after all, is one of the “third rails” of romance – an issue so decisive that no one dares touch it. But Woods does more than touch, she grabs the electrified wire and doesn’t let go. The result is an unflinching look at the havoc an affair has on everyone involved.

Mel is a family doctor, married to anesthetist Adam and with two kids in tow. When she meets Matt on a flight across the country sparks fly, etc. The perspective alternates between Matt and Mel and the different voices are well done with the switches strategically placed.

The thing with an affair is you know it’s not going to go well. She’s married with kids, he has a fiancee… there is no simple happily ever after at the end of this. The most cringe-worthy parts aren’t skipped (so the narrative feels whole) but they are short enough to keep the actual cringing bearable (I don’t want to know what kind of faces I pulled while reading, though).

One of the largest themes for me is the thought that the easy way is rarely the best way. The affair that presents itself as an answer to your humdrum existence will not heal you. Ignoring problems by falling into a beer bottle does not make them go away. Doing something you know in your heart is wrong will likely end up badly. Not having tough, deep conversations with the people you love means you’ll only skim through life with them. Life is messy, even without cheating on spouses, and that mess is a thing to be embraced.

This book is solidly written, well characterized, and throws some nice curve balls into the plot. So while this “stretch” book landed outside of my sweet spot I’m sure there are many people that will enjoy it.

Disclosure: I received a copy of this book in a giveaway in exchange for an honest review.